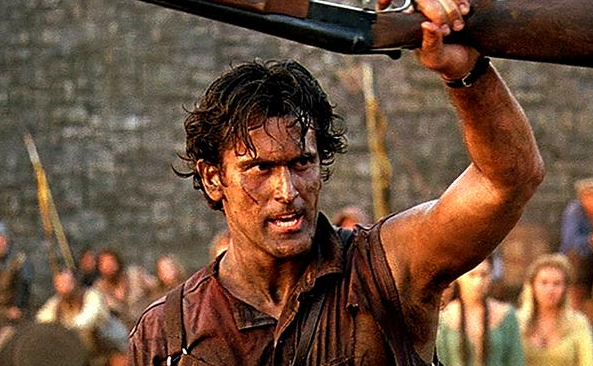 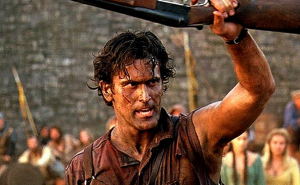 Some dudes just know what to do when skeletons try to kill ya. Me? I just run.

The really neat things about being an actress and in the movie biz is this: Sometimes you get to meet really fun people. Better yet, you get to call them.

is one such dude. Great guy known for something called “Evil Dead” and “Army of Darkness” and lots of other flicks I can’t remember but I am sure many of you folks reading this will remind me. Bruce has also done tons of TV — some of that TV stuff actually pays the bills! Ha. We spoke of books he had read and had written. His being, “If Chins Could Kill: Confessions of a B Movie Actor

” and I reminded him of one of mine “If I’m So Famous, How Come Nobody’s Ever Heard of Me

” We yakked — he in his house in Oregon, and me from my house in Los Angeles — I thought for the sake of any of you fans reading this, I would chat Bruce up about his freakin’ movies of which (and I am so sorry to you many of you die hard horror movie fans — I have never seen any of Bruce’s movies

“, not “Army of Darkness

” nothing. I did catch about five minutes when I was channel surfing some TV show called “Burn…

” something. (I could be wrong on that title, mostly likely I am — but I am not writing this as a “let’s interview Bruce Campbell” and get down the entire resume and quiz the shit out of him.) Those of you who really know me, know I have I don’t like Horror movies and hardly watch TV. I don’t mind starring in horror movies — but I seldom see them unless they contain a naked chick, a bad fish, or a giant bug like in “District 9

“. Which was the last in my opinion Horror movie that scared the crap out of me.)

So here is some stuff I can print that Bruce and I chatted about… Can’t say it’s mind altering or incredibly intelligent — but if you like Bruce and you like me, then this read is for you!

Me: What were your regular jobs before Evil Dead?

Bruce: I was a cab driver for a year, I was a newspaper delivery boy, I worked in a grocery store as a stock boy, you know all that good menial stuff. I was a Janitor for a little while… because those jobs were easier to get and flexible hours… cab driving was at night for example…

Me: So how many Super-8 films did you do before that ‘Big Break’?

Bruce: We did a bucket load of them. I don’t know if anyone did an official count of them. Scott Spiegel started them in 1969. I started doing them in 1971-1972 and then Sam Raimi kicked in with his… If we piled them all, it will probably be over fifty… because that’s all we did.

Me: So what type of flicks did you do on these Super-8’s?

Bruce: Oh, there was this full length murder mystery… we did Civil War epics – that was easy because a lot of neighborhoods were we had, had a lot of those old Civil War type fences, so we went, “Oh, that’s perfect” and we were taking a Civil War class in High School… so we actually got extra credit on that.

Me: So did you actually screen any of these Super-8’s anywhere?

Bruce: Oh, we showed them at any party’s we could get our hands on. Because that was our test audience, was a party. Usually, the response was that if you hold the attention span of a people at a party, you were fine. And if you couldn’t the movie Sucked.

This is where I start to fade because seriously? I haven’t had my coffee yet and I am thinking about taking new commercial headshots soon — when I remember this story about Bruce and Hollywood Boulevard and the first time he came to town. I am big on retelling stories so I think in the future when I talk to pals I am gonna toss in a few “ME Memories” like this one which goes like this:

*Bruce along with Sam when they first got to LA, took a stroll down the Hollywood Walk of Fame staring at the stars embedded in the sidewalk. Seeing the usual dead folks; Jack Benny, Dinah Shore, Charlton Heston

– when wait, that’s no dead star! That was really Charlton Heston walking by. Bruce ran after him. Babbled how he loved him in this movie and that movie and after finally “sufficient groveling” Bruce let him pass. And not too much later Bruce met him “officially” at some AFM party (which is an event here in LA where Independent film makers go to sell their products or try to get funding for future products.) Naturally, “Chuck” didn’t remember him. Bruce told him, “I met you when I was just a big fan! Now, I’m an actor – just like you!” Heston replied, “…Indeed?” Bruce of course waited to hear more, which never came and a few years after Bruce met Heston — again and like out of scene from “Groundhog Day

” Bruce detailed the previous meetings; again, Chuck didn’t remember him. Bruce always trails off when telling this story… I told Bruce it was probably the onset of his Alzheimer’s and he shouldn’t take it personally but I was secretly thinking, anytime I talked to Chuck he would always have a long conversation with me, a little about the movies he had starred in and a lot about the skeet tournment he was hosting or was going to host and telling me, “You shoot well. You have a good eye. You have that ability to hit the target and turn it to powder.” Okay, I think to myself — Is that a good thing? Never have I heard more talk about guns — from any man — as long as Chuck talked to me while holding an over and under Winchester in one hand, from a dude who as a child and after watching the “The Ten Commandments

” enthralled me enough to actually read the Bible.

So I make coffee and we get back to the really important part like Super-8 film making and Horror flicks.

Bruce: That’s right. In fact, obviously it was a Super-8 movie we used to show investors. So we owe quite a lot to Super 8. But when you say Super-8 now, they think you mean Hi-8 or something like that. No, I mean Super-8. You know you can still buy it.

In fact, Sam Raimi was really tickled because for ‘Love of the Game’ he got to shoot Super-8 footage for the movie.

Me: So was Evil Dead something you aspired to?

Me: No one should never crap around, if it bleeds it leads — Ha…

Bruce: Yeah, you know, they are not chick flicks, you know. You know, in fact, guys have used the Evil Dead movies to test their girlfriends to see if they want to date these women.

Me: And what standards, does a woman have to meet?

Bruce: Well, if they could either laugh, or sit through them… then they were fine.

Me: Well, shit. No wonder I haven’t been laid in a while. I can’t sit through them without walking around the room, one hand over one eye or both eyes and standing in a corner with my back turned when some human or creature gets blown to bits. Never take me to Horror screenings. I told that to Adam Green

last month, when watching his trailer to Hatchet III

— I could sit still for even the trailer.

So I have some errands to run — I will catch up on this tomorrow.