Outstanding Performance By A Male Actor In a Supporting Role… 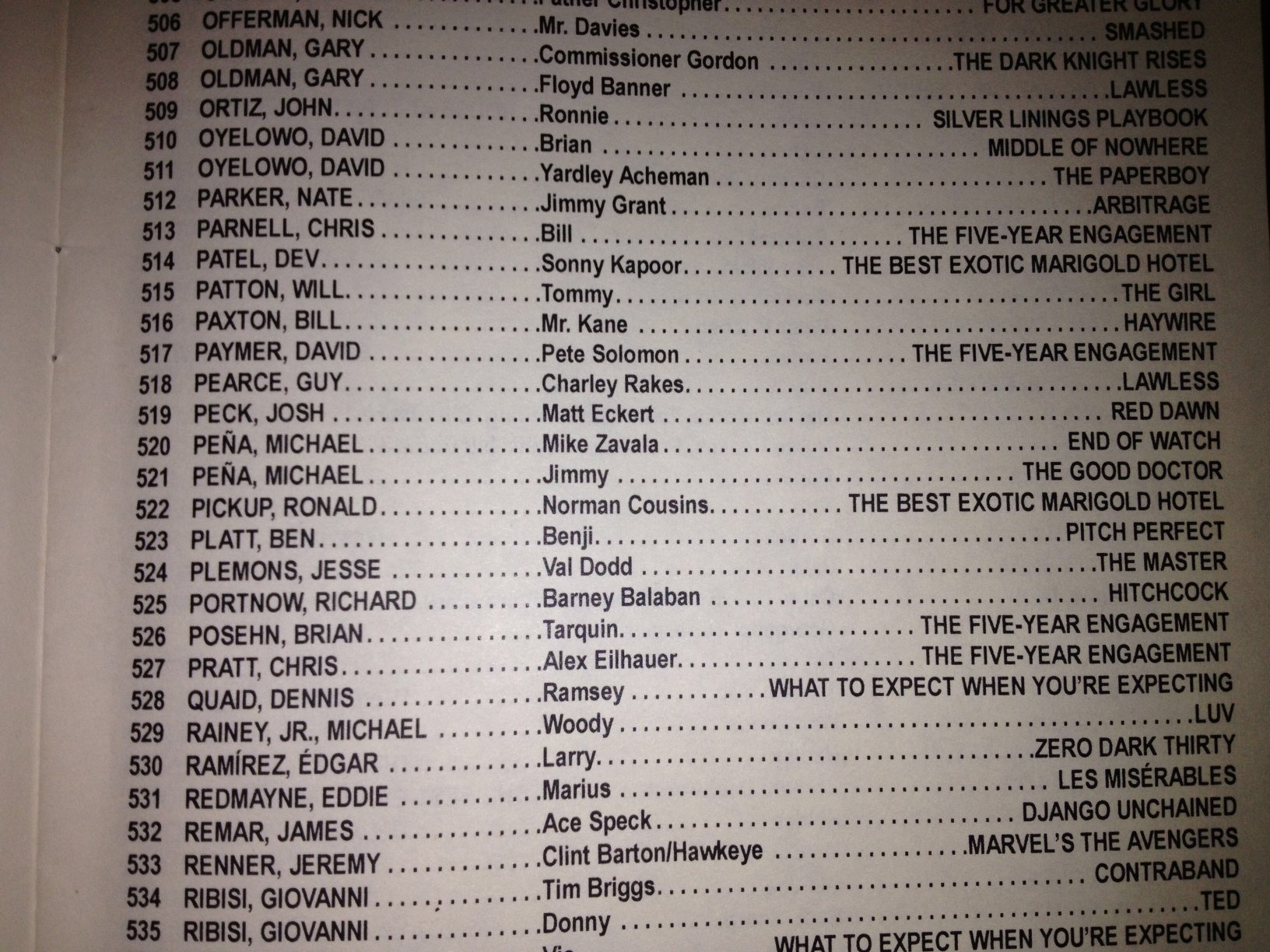 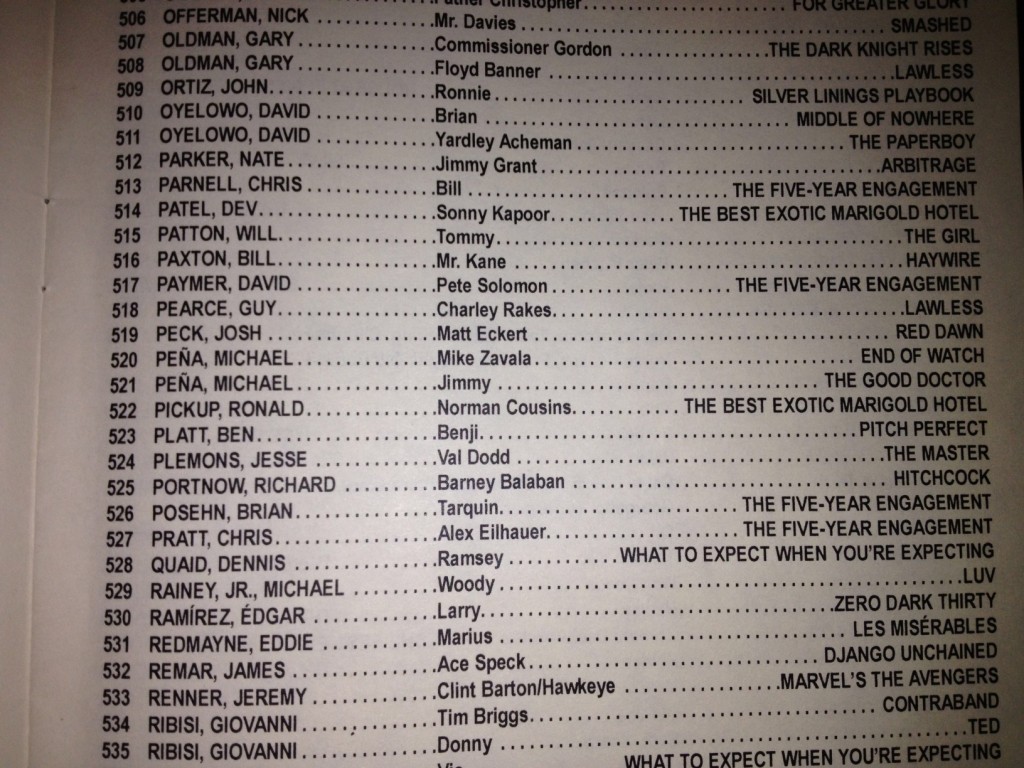 And the winner is~

One freakin’ tough call. Pages of names aligned by numbers and submitted by actors and or their representatives. I saw so many of my real friends of this list, I felt like I was voting for Home Coming King. This was a very hard category to pick from. There were super stars on this list in larger parts I wouldn’t exactly say were “supporting” and then there were folks so laughable being submitted I thought I snot myself silly. Mostly, I think the more laughable ones were submitted by managers and most likely the actors themselves to keep their names “out there” I envisioned the agent for Jean-Claude Van Damme putting his arm around Jean-Claude and somberly saying to him with the upmost tone of importance, “this win is yours, you were made for this, Baby!” There is nothing in this town, folks will not say or do if it helps getting the naked silver or gold man in the home stretch of any award show.

Me? This category took me an hour to narrow down to the five I chose. And here they are:

Ballot boy, number 353, JAMES BADGE DALE, Gaunt Young Man, from the movie “Flight”. He was brilliant as the man in the stairwell taking a smoke and talking about life and the meaning of life. I must have rewound his performance twenty times. And, each time, he seemed to grow and get better as if by some pixie dust was sprinkled on to my DVD and floated into my disk player and worked its magic. Turning this Gaunt Young Man and this quiet scene into movie magic with leads, Denzel Washington and Kelly Reilly.

Ballot Boy #525 RICHARD PORTNOW, Barney Balaban, in “Hitchcock”. Richard portrayed the films studio boss who Mr. Hitchcock came calling on trying to convince the studio to back his movie “Psycho” naturally like, any studio boss, Richard was both slimy and forceful and I enjoyed his performance from beginning to end. I voted for Richard for many different reasons. I have known Richard for some twenty plus years, hung around him many years ago, both in acting class and as with many actors in this town our paths kept crossing. I would catch him working with pal Forest Whitaker in “Good Morning VietNam” and later in “Sister Act” and through out the many years since, I would find myself paying good money to see a film and there he would be in supporting role after supporting role. I would say to whoever was sitting next to me, “I know that guy!” and I would usually be met with feign in difference and a blasé, “so?”.

Anyone who has been in this biz as long as I have knows how hard it is to get ANYTHING in a movie. The competition is ruthless, and these parts are the bread and butter as an actor. Filmdom’s true “Supporting Players”. Not the folks like De Niro who was also in this category for “Silver Linings” and while yes… Robert did play a “supporting part” but seriously? The dude is Robert De Niro! And, lately seems to be turning in the same performance. So I clicked on Richard’s name, mostly for his body of work in the last 30 years and a little for this movie. He was very good in this part and I think this part will allow him to be seen by folks who are in position to hire and most likely Richard will go on to yet other movies where I will be gasping, “I know that dude”, to a total stranger next to me.

Ballot Boy number 573 and 574 CHRISTOPHER WALKEN, especially as Hans in “Seven Psychopaths”, took my breath away. All I kept thinking throughout this flick was “how does Christopher Walken do it?” This man can make a moment leap into the theater were one finds themselves awed into silence or in the very next moment one finds themselves laughing by how ridiculous he can make a scene seem “real” no matter how improbable it may seem. Then this same freakishly awesome actor does an about face as Peter Mitchell in “A Late Quartet”. I am personally going to vote for this man when the Academy Award Ballots roll in. I love, love, LOVE this man and in some warped fantasy I have, wish I could marry him surrounded by zombies on the last day of the Zombie Apocalypse.

Ballot Boy number 516 is BILL PAXTON in the movie “Haywire”. I love Bill. Nicest guy you will ever meet. Non Hollywood, loyal, and in my case, many moons ago he made a personal call to the casting folks who at the time were casting “Blaze Star” and told them he thought I should be considered for a part somewhere in the movie as I had me some “stripper” experience. Nobody in this town and very seldom actors go out of their way to get you in the door. I honestly don’t know why that is. I think perhaps it is about “perception” if one were to bomb out in an audition or in some way not be “exactly” what casting folks, or directors, or producers are looking for — that introduction will somehow be perceived or reflect negatively upon the messenger.

I loved this movie. It’s quirky and … everyone was so good in it. And, that is one of the problems with all this voting for “Outstanding Actor this or Outstanding Actress this…” It is all so political. One firsts has to be submitted by the actor themselves or a representative which has a billion issues right there and then there is the choice of category one chooses based on the likely hood of actually pulling off a “win” and then from my POV — I get five pages of folks where I know about half and can appreciate their work and efforts and I am only allowed five freakin’ picks! Not fair. The Nominating Committee should have a category added to the end, “Outstanding Favorite Friends”. Heck, they have “Outstanding Action Performance By A Stunt Ensemble In A Motion Picture” why not add to the ridiculous? Right?