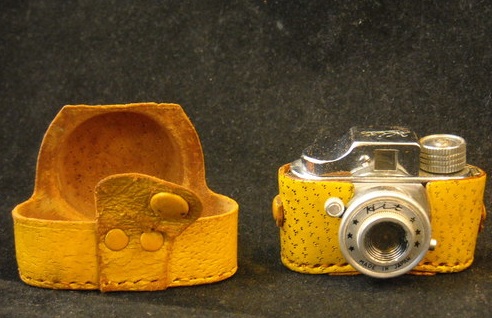 Yesterday I bought a camera.

Nah, not a “real” camera. Just a toy camera I found on eBay to put on the shelf next to my other toy camera I got out of a Woolworth’s gumball machine on Van Ness street in San Francisco, when I was ten. I can still remember the first time I saw that tiny camera sitting behind a fancy cut out of its own image, three times its size, and inside a glass gumball machine. I could just reach the strap of one of the tiny camera cases. The strap felt so “real” as in a “real” camera case for a REAL camera! I wiggled the tiny leather strap this way and that from under the lid — and try as I might, I couldn’t wiggle or push its little body free from that damned dispenser. Frustrated, I stared at the mock drawing of the tiny camera it’s two inches in girth seemingly mocking me, while I stood there helpless under its magnetic hold it had on me. My eyes fell upon the tiny rolls of film that if bought! Came along with my tiny camera purchase. I stared at the bright and bold advertising, which read: Hit Camera. Below that in smaller letters were words proclaiming this to be a “real” camera, which “can be yours! For 25 cents!”

Back in those days, anything coming out of gumball machine costing more than a penny might as well cost a million dollars as far as my mom was concerned. The answer was always, “no” and in most cases the word “no” came long before my question.

My mother and I would walk past Woolworth’s every day on the way to the bus stop and every day, I would lag behind, or speed up ahead of my mother to see the marvel held within the gumball machine. And, every day… as I started to ask my mother, the woman with whom I was living with and counted on for food and shelter would and without hesitation scream —

“NO!” My mother would yell, before I could even put on the whine or smile depending upon how I would read her demeanor at that particular moment. “We don’t have the money. I told you yesterday, and the day before yesterday and last month! A quarter is the price of two transfer tickets to the market… we can’t afford it.”

Didn’t she know my future dreams laid just beyond that gumball machine?

“But, Mommm…” I would whine, prolonging the “m’s” in the hopes she would hear that this time, and not all the other times I had promised, I would never, ever, not even with cherries and whip cream on top — I would ask for one more thing again IF she would just buy my most recent object of desire — and in this case? I HAD TO HAVE THIS CAMERA!!

My life depended on it.

Or so I told my mother in the most sincere way I could muster.

“Your survival on this planet is dependent on you getting a camera?” she would say with such inflection only a true Brit can muster. Even to my ten-year-old ears, it did sound a bit far fetched.

“Uh, huh…” I would mumble and then adding straight-faced and lowering my voice, I said, “I will die.”

My mother in her infinite wisdom and usual choice of just the right words to say, uttered, “then, die, already. I will have you stuffed and shipped to the Natural History Museum here. You will become a novelty, just like that silly camera you want so badly.” And, she would walk off never looking back in any way, not even for a second — cause if she had — she would have seen my jaw hanging open like a marrionette left hung out on a hanger.

I didn’t die, of course, as I had thought. In the days and weeks that passed there were times, I would look at my mother and wish I would have died right there and then in front of that Gumball machine because then? Wouldn’t she be sorry, wouldn’t she —

But I didn’t die. And, my mother, two months later, did get me that camera for my birthday. It came in a beautiful brown case and a box and my mother had even bought me a six-pac of tiny film for my shooting pleasure. And, I shot everything!

I still have those six rolls of film. Long since shot, sitting along side my tiny camera on my bookshelf in my living room. I will never forget those precious days I had fun shooting away as I held my red dodge ball, or gazed at the army of ants marching to the sugar in our cabinet. Or the day, my mother learned that developing those tiny rolls of film cost $5.95 — and a veritable kings ransom — back in those days. Needless-to-say, no begging, however I threatened or whined ever did get those tiny rolls of film developed.