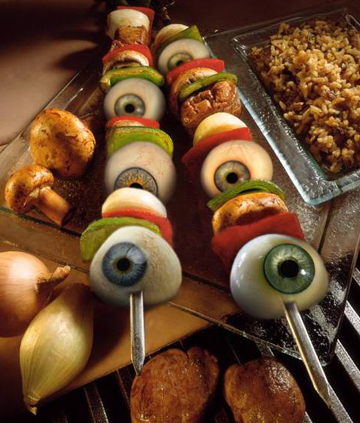 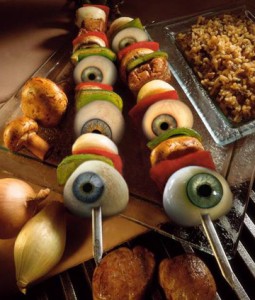 Anyone care for an hors d’oeuvre du Eyeball?

As with any things these days there is always a sequel. Or in this case? A mini-sequel as I have to get to a couple of other things to do today like visiting doctors’ offices, police stations… you know — the usual actor’s life.

So let’s see where did I leave off with Bruce Campbell? Hmm… Oh, yeah. Something about an eyeball in a mouth

. Ya know… that is not the first thing I think of when hearing something going into a mouth

Bruce: Hmm… That was the Eyeball Fly Ball

moment in some fashion.

Bruce: No, and in fact, the pay-off was never put in the movie. Sam wanted much later in that movie, wanted the character to kind of, burp that eyeball back up and it would sit in the palm of her hand looking around. But it was either too gross

, or we couldn’t figure out how to do it.

Me: And this is what you guys were thinking? How to make an eyeball look more attractive in a palm of a chick’s hand? Bruce… dude… we so need to talk about that later at some point.

Bruce: Yeah, you sit around, between all the different drafts of script some of the ideas come and go… or you know, it didn’t really relate to the threadbare plot…

Me: So what’s the story with ‘Blood Simple

Bruce: Not in the actual movie. It was in the what The Coen Brothers

used to raise money in their first movie… they shot a kind of ‘coming attraction’ as if the movie was actually done… we did ours on Super-8, they did theirs on 35mm… and they showed that to investors – so I was in their fake movie, not their real movie – the part was played by Dan Hedaya, in the real movie.

Me: Boo for you. Good for Dan.

, Oregon. Hippies. Drugs… and Johnny Depp’s new digs there and hand at being a wine grower. Me joking, about calling Johnny’s new wine label

something like “Pirates Blood” with a log line that reads: “Drink at your own risk, matey”. Bruce doesn’t laugh. Not funny, I say? I kind of whine… hoping he would at least chuckle, for crying out loud. He doesn’t.

Me: Is it really true, that the Evil Dead house was turned into a country Brothel after the shoot?

… and there were very sleazy women with big hairdo’s, coming in there, with way too much make-up. You know, it was a backcountry brothel –

Me: So at this point how did you sum up your career?

Bruce: At that point, I had no prospective at all. At that point I was just happy to have made a film – that actually, got released in theaters. It was only later, that I realized how Hollywood works…

Me: Do you look kindly on your ‘Evil Dead’ movies.

Bruce: Absolutely. I can trace all roads back, to the very first Evil Dead – I can trace everything that happened back to those movies.

Me: So do you consider, Evil Dead as the break?

Bruce: It was, it was… but we made it ourselves… I think that’s what a lot of people make they wait on a street corner, waiting to be discovered…

Me: Obviously you get a lot of fan mail? What is the most often asked question?

Bruce: Will there be an Evil Dead 4?

Me: And will there be?

I know… you all want the answer to this. And I would love to supply that answer. But I have to run. Got lots of important things to do today like, get dressed. Have more coffee

willing to have sex with me…