Get Rich Quick! Sort of… 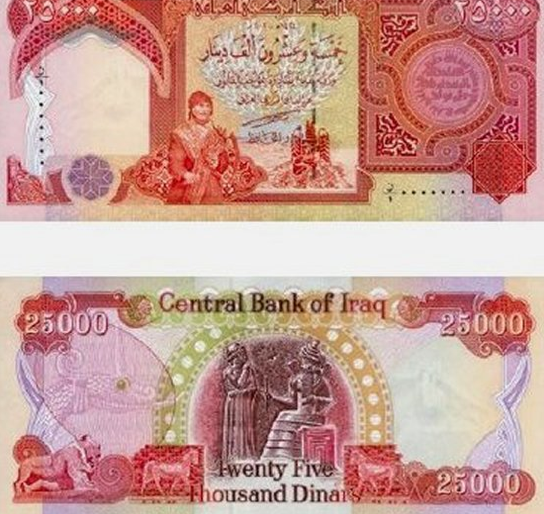 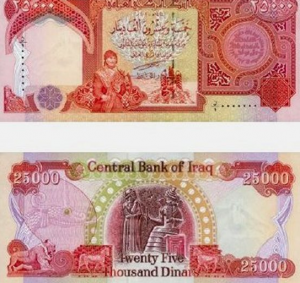 A few years ago, I bought into the idea of “investing” in the Iraqi Dinar because I had heard it was a better “bet” than any Mega Lotto ticket and like a fool I did little research hearing only  “millions to be made”  Buy Now! Mantra. In the euphoria of seeing money beyond that of any Leprechaun’s pocket change…  I quickly snapped up three hundred dollars worth of Aladdin’s Fools Gold thinking any day I would be richer beyond my wildest dreams.

It is crazy what people do when the thought of getting rich quick enters the brain of a person struggling with a mortgage and car payments.  Crazier still thinking the Dinar is an “investment”, yet… for me then and for thousands of others, the Dinar seemed to be papered in real riches.

Lately, I have noticed the Dinar is making a come back on the Internet and as I have learned my lesson, I would like to pass on some things to think about before a Dinar becomes an “investment” for you.

1. It’s not traded on any legitimate foreign exchange, although there are plenty of dealers around the world, which are largely unregulated.

2. Any one who knows the Internet and knows the loop holes of how to make the Internet pay knows this:  Scam artists have set up all sorts of websites and bulletin boards and newsletter and social media and you-name-it to try and create the impression that  Dinars are valuable and are about to re-valuate at any moment. In fact,  Hit and Run,  a movie that just opened a few weeks ago has the Dinar as a plot point (which just goes to show you if Hollywood has a movie out now, and an average okay budgeted flick takes at minimum; three years to get off the ground — this whole talk of Dinars has been floating around for say…longer than, Honey Boo Boo Child has been walking this earth.)

I grabbed this from Iraq-Buisness News:

It is 7 am in the morning and I have been up since 5 am reading hundreds of different sites all trashing the Dinar and screaming “scams” at  every click of the mouse, I read a hundred or so articles that speak of  “dropping the three zeros” and Iraq’s long time plan to redenominate the Iraqi Dinar. To be sure, Iraq’s Central Bank is on the path to dropping the zeros and has even said so in their minutes at Parliament a month or so ago. Does this mean the Iraqi Dinar will suddenly re-evaluate? I think not. I think it simply means that both the Dinar as in the form it is now will circulate along side the new version Dinar and “investors” will be given a time period to trade in their Dinars for the swanker new and easier to carry newly minted and less zero currency.

I have friends who insist! That I am wrong, each saying, what is the point of changing the Dinar if it doesn’t increase in value? They go on to tell me, look at the Dinar during Saddam’s time, “It was worth 3 dollars” or look at the re-evaluation of the Kuwaiti Dinar right after the first Gulf War. I answer my friends like this; Saddam was a Dictator, who had sanctions against him for over ten years and wasn’t allowed to play with the rest of the world as structured by other nations and like any dude who happens to control a country by whim, he and cronies of his regime created the “value” of the Dinar which is sited by many folks in the Dinar world as what the Dinar used to be “worth”. Therefore, one day soon, the value of the Dinar should go up. Those same folks also site, as proof, the Kuwaiti Dinar re-value issues. I see it from this viewpoint — Iraq invaded Kuwait and as with any invasion money was stolen and Kuwait had no choice but to revalue it’s Dinar for their country to continue commerce after the Gulf War. Did that mean the Kuwaiti Dinar rose in value? No. It meant that a few folks profited by stealing and in a blink of an eye were able to launder the old Kuwaiti Dinar into the brand new one’s offered by the Kuwait Government once they had regained control of their country.

I like to liken this whole talk of the Dinar to that of the US $2.00 bill. I can remember when it was the talk of great things. “It will lessen the amount of the 1 dollar bills one has to carry in their wallet” folks used to say. Then the $2 dollar bill came out, and folks would get it confused with all the $1 dollar bills mixing with the $2 dollar bills and there were a bunch of folks who bought a gazillion of the new notes saying, they too, will increase in value. Did printing the $2 dollar bill, re-value the dollar? Obviously, no.

The Sterling Currency Group an online “investment” company which offers Diners and the Vietnamese Dong. Reading about the Dong as an “investment” makes me laugh. Back in the 90’s and during the American embargo of Viet Nam, I heard lots of the same talk, many of them by expats living in Viet Nam, each telling me very earnestly, “Once the Americans are allowed to legally set up corporations here in Saigon [then called Ho Chí Minh] the Dong is going to skyrocket!” This was echoed throughout the country by the Vietnamese and expats as I haggled for original Zippo’s carried by American soldiers during the war and took the first “tourist” trip to a newly enlarged Viet Con tunnel at Chu Chi.

As I read this Sterling Currency Group’s web thingy… I notice, and perhaps it is a phrase mistake by someone like me in a rush to write and post or perhaps not, but I notice this: Internal Revenue Department.  Anyone looking at a U.S. tax form can tell you, it’s the “Internal Revenue Service,” and not “Department” as is written.

Then it occurs to me; what if all of this is a big scam by our Government to squash the Iraq Dinar Get Rich Quick Plan because “they” know the Dinar is going to revalue and our Government secretly has invested billions of our tax payer monies into this because elite folks within our US of A know it will bring a cash win fall? I mean why else invade a country, right?

On that note, and like anyone playing the Lotto, I dropped 300 dollars worth on Iraq Dinars. Years have come and gone and the Dinars I had bought still lay untouched in the back of my closet gathering dust. I don’t trust the stock market, the banks, and after seeing what is happening to the housing market? How bad can a Dinar investment really be?  My gut says, there is no way the Dinar will ever re-value in the way the Get Rich Quick folks want you to believe, economically not possible.

I guess, one could call me a sucker. And that would be true in Dinarland… I also buy five dollars worth of Lotto tickets once a week in the hopes of “winning” a fantasy hard work couldn’t provide me for in this economy.