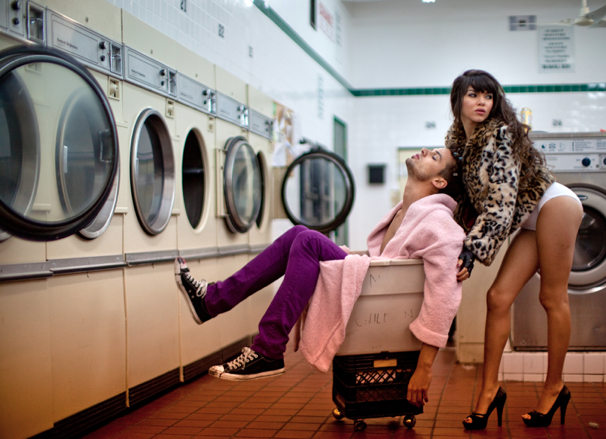 I am at Fluff and Fold, a two-buck laundromat, in the west valley of Los Angeles. Ordinarily, I would be washing my clothes and heading over to the corner 7/11 to buy a few magazines and a jug of chocolate milk. Instead I am watching a debate. Not the primetime broadcast kind with dueling Presidential-looking (or not) candidates but the kind of debate, the sweat of folding fitted queen-sized bed sheets into small, flat, and neat compact squares. The kind of talk that is started when all talk of  how clean or how white one’s bed sheets should be — ends. Leading to the next natural bit of laundry speak:

“I know.  The priest should have said something… let the cops know… something.”

“He couldn’t, don’t you see? He couldn’t… the murderer confessed to a group. Not in a one-on-one confessional. Mia… it was not his place to tell, why do you keep going over this…” the portly man feigned a look of genuine sadness as he folded a toddler size K-Mart t-shirt with a faded Batman logo and placing the tee in the laundry basket before him.

Who knew this cash for clean was a mecca in psychological rationalization?  Defenders of religion often try to say that we need religion to instill morality, and manage to ascribe this kind of immorality to zealots of “other” religions, but how do we find the morality in any philosophy that would encourage silence and rationalization in the face of such a confession?  How do we reconcile an ethic that finds the “Holy Spirit” powerful enough and sufficient to relieve the guilt of a child murderer?  Or that puts protected confession above any feeling of empathy for the parents of that murdered little boy?  How do we cope with a religion that puts so called “faith” above a proper, conscience-guided sense of right and wrong?  Examples abound of religion–all religions, in history and currently–encouraging blind adherence to zealotry and faith, and/or protection of a misguided, entrenched hierarchy over the development of a moral conscience that can distinguish right from wrong, but really, this all still all reminds me of Eichmann’s Nuremberg defense that he was “just following orders”.

I read the list of Do’s and Don’t’s about suds and softeners and how it applies to this or that kind of washer at this public laundromat.  It is an endless list.  Just then, I think, what if I were to rebel? And, wash something that is listed as a “do not wash” and wash it anyways? Would I be arrested? Would the quarreling Hispanic couple next to me, send me to a confessional? Would the Holy Spirit of all those washers long since abandoned and rusting in some junkyard near — come after me in a sea of mechanical mechanisms just because I tossed in one too many zipper teeth garments?

Suddenly, I couldn’t bring myself to washing my clothes. I know, I will stink for another day or three… but the important part is I stood up for something! I stood up for not washing my clothes in the face of washer rules — I didn’t agree with both morally, financially, and in the name of preserving what is left of my delicate washed-to-death, under garments.

I will instead, boycott washing my clothes as a statement so others may smell my victory!

And, that my friends! Is an Accomplishment!