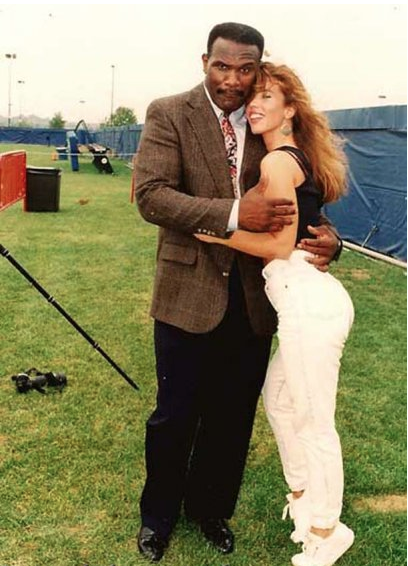 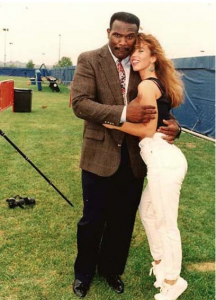 So there I was, lost in a dream when his voice suddenly intervened to awaken me to the reality of a New Day. “Excuse me, Miss Shepard, but would you like me to start your bath, now?” It was my faithful man-servant Bruno, rapping gently on my bedroom door…Bruno, who has been so faithful since I rescued him from the midst of a bloody coup in the Philippines, while making a picture there.

I rolled over to glance at my companion, a still-sleeping Governor Chris Christie . I could hear his last words of the night before still resonating over my head: “Again? A man can only do so much,” he’d said, almost pleadingly. Poor Chris. He’ll just have to learn that you shouldn’t start anything you can’t finish.

“Oh, well,” I muttered to myself. At least he doesn’t snore as loudly as his former aide and appointee David Wildstein.”

“No, Bruno,” I called out as I slipped from beneath the satin sheets and padded across the marble flooring that was a gift to me from the King Jigme Singye Wangchuk of Bhutan. “I think I would prefer a shower today,” I told Bruno – and I could hear him scurry off to begin adjusting the water to my precise body temperature.

Over the years, I’ve received countless letters wanting to know what’s it like to be a B-Movie queen. Well, my day is pretty typical, actually…not that much different from yours. But, for those who simply must know, I’ve decide to run down an average day for you. Now, where was I?

You’d love my shower – a gift from the Emir Sheikh Jaber Al-Ahmad Al-Jaber Al Sabah of Kuwait who once staged an all-out three-week campaign to entice me into becoming his eleventh wife (brunette division). “You’ll be my favorite,” he kept telling me. Yeah, right. The only remnant of him in my life is this shower, designed to look like every shower in every B-movie, complete with life-size cut-outs of Sybil Danning, Edy Williams and a lecherous camera crew.

Vidal fell to his knees in tears. “No, no, Ms. Shepard, please. Not José Eber. He wears funny hats. Just give me three minutes to bring your full, natural beauty to the surface. Just three minutes!”

Well, I’ll hand this to Vidal. In two minutes, he had me looking like my old self. Then, still wrapped in a towel, I wandered through my wardrobe rooms until the appropriate outfit caught my eye…one that Vera Wang had designed for me to wear whenever I went to Fatburger. It was especially heavy on the red sequins, the better to mask catsup stains.

Harold, my morning chef, had breakfast ready by the time I arrived at the table: Eggs Champagne with slices of glazed apricots, trifle, scones… “Lovely work, Harold,” I told him. “But I only have time for a Twinkie.” Harold started to weep but I told him, “Save it for my guest.” I thought again of Chris sound asleep upstairs and, for a moment, contemplated crawling back into bed to see if anything had reformed overnight. Just then, however, the telephone rang.

“It’s the studio,” said my personal assistant Arthur, whom I stole away from the service of Princess Margaret by offering him a chance to live in greater splendor. Grudgingly, I took the phone and heard, “Sorry, Ms. Shepard…we have this problem. Uh, we need you for a reshoot of one of yours scenes. Could you come right away?”

Oh, the annoyances of stardom. I summoned Jeeves and had him bring out my car. “The Duesenberg or the Maserati?” he inquired. I told him, “Today, I think I would like to take the Limo…the red one!” He hurried off to the garage and, within moments, we were tooling down the Hollywood Freeway. I sat, as usual, in the back, talking on my five-line cellular phone. “No, Hillary dear, I haven’t read your autobiography yet…I have a pile of screenplays the size of Kareem Abdul-Jabbar to read, first. How do I know? Well, I had Kareem fly in from Hawaii last night and stand next to it.” There was a ring and I had to tell Hillary, “I have to put you on hold…that was Barack on line four.”

Twenty minutes later, I was on set…and all to do just one pick-up line from my last film. It was a terrible drudge – and not just because of how it wrecked my day but because I now had to re-create a moment from a performance of months before. In constructing a characterization of a movie, one must fully focus on the role and the motivations, large and small, that inform the character. Long weeks of preparation had gone into becoming the person I portrayed in the film and I thought I had left “her” behind me on the set when shooting wrapped. Now, completely out of context, I was being asked to jump back into a life I had long since abandoned…asked to recapture without the many scenes that led up to that moment. Finally, after asserting every ounce of my training as a professional actress, I signaled my director that I thought I had recaptured the proper frame of mind and that he should roll film. He did.

“Eat leaden death, you scum,” I yelled as I fired my Grenade Launcher and blasted fifteen Asiatic stuntmen from the trees.

“Cut! That was perfect, Jewel,” my director yelled. Far be it for me to disagree with him.

As I hurried to my dressing room, assistants and reporters fell into stride with me, snapping out questions.

“Is it true you voted early for Obama/Biden when you knowingly were sleeping with John McCain?”

“Are you really hosting the Oscars next year, Ms. Shepard?”

“Why did you turn down the lead in The Changeling and make them rewrite it for Angelina Jolie?”

“Ms. Shepard! Is it true you made them reschedule the entire Cannes Film Festival so it wouldn’t interfere with you leg-wax appointment?”

“Is it true that you just made a down payment on the entire state of California, as your part in helping California pay its employees?”

I slammed the door of my trailer, shutting them all out. I had to be alone with my thoughts for a moment. I threw myself on the Queen-sized bed, slipped under a comforter that was personally hand-woven by Grandma Moses and drifted off to sleep for a moment thinking about football… and Baseball, and how about those Dodgers?