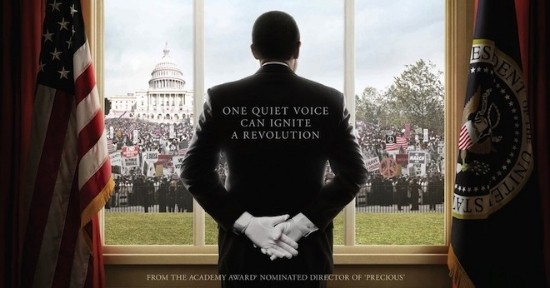 I am trying to figure out which of the three listed above is more Important than the other two. Or is it important that I care if it’s important… as it reads as important?

How on earth do I get up in the morning? So many important things I think about! Holy Moly! My brain just stews in the importance of such thinking.

I did however see “The Butler” starring long time pal, Forest Whitaker, yesterday. He gave an incredibly wonderful and deep and dare I say? Important! Performance which will by years end be;  a super-duper and important enough film worthy of any naked and gold-plated *important* dude any one sitting at the Kodak Theater come March 2014 wants so desperately to own they will stop at nothing! They would even prance through a sea of noisy, well dressed, and not reporter-like folks at all but reporter fashionistas — themselves, Desperate, for a second or three of tape time with a potential winner. Each reporter head, staked out just inches away from the red carpet asking YOU, the suddenly important actor or actress of the moment — in a round about way of course, what is it exactly about YOU that makes you IMPORTANT? 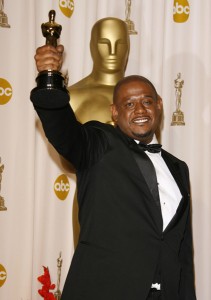 Jewel’s friend Forest claiming one of his many Oscars.

Mr. Whitaker, a very important man, gave an important performance worthy of Mr. Oscar, or that “naked thingy” is how I use to describe the man anyone in this industry would give their right boob to just to say they were nominated. Me? I call Oscar, “Thingy” (because, for me, he will always be a Thingy. Unattainable except for the knock-off, six inches of plastic

I have stored somewhere in some desk drawer from memories long since passed and obviously forgotten until rummaging through a clutter-filled desk only to pause and go, “Oh…” I would always catch myself saying upon stumbling upon him, naked and in my drawer. “Oh…” I would sigh again, “wish I had a man like you, to pine after, lust after, oh… if I could find such a man as you, Thingy!”)

Forest on the other hand will never be forced to say such ridiculous things to a plastic six-incher as I have stored away. Nah, Forest is a lucky boy. He gets to smile at his Thingy, and have others smile admire his Thingy as well. Me? I, a few months after, (as it takes that long for Oscar to come back engraved) will go by and check his Oscar man out and all the other awards from films like the “Crying Game,” “Bird,” “King of Scotland,” and this, Oscar Butler, and second Thingy to his mantle of well deserved prizes.

He will surely be up on stage next year at the Kodak theater, clutching Oscar and speaking with great importance, “This film would not be possible…” he will begin… after a few seconds pausing to stare down at the stage floor to compose his thoughts and then Forest will go on to being incredibly gracious. Thanking first the Academy, Oprah, a little bit about the man the movie is based on, say, he is once again, thankful for the opportunity to play such a part. He will thank the cast, the writers, the director and will appear very serious while making this speech until the end, where he will then flash a smile filled with sweetness and a slightly uncomfortable expression to his face, as if  suddenly aware of being “caught” up on stage and in front of a room of his peers and those folks who got to this night via a ticket selling their souls to some online Sweepstakes Ad proclaiming this event to be so, Important as not to be missed! 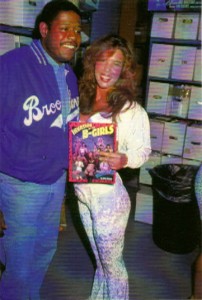 Jewel and Forest in the days before all the awards and blogs.

In honor of Mr. Whitaker… I am posting a crappy photo of us deserving of a smile. The kind of smile, Forest will be flashing come Oscar night.   The kind of smile he used to give me while watching me feed Hostess cupcakes to my dog who seconds before appeared to be lifeless in my lap but at the sound of a cupcake being unwrapped? Never have the dead come back to life than when my pup, Popcorn, heard a box of Hostess cupcakes being pushed around in a kitchen cabinet. Little did my Popcorn know at the time, that importance was more than a bite of Hostess Cupcakes but that my pooch, my Popcorn, was sitting among the truly important. Ha ha ha ha.

Sorry, Forest… just so laughing. Tell the family I say, “Hi” give them all my love. See you at that red carpet thingy. Another award for your mantel…  I think you have won them all by now.  Hmm… Nope. Not true. Missing that important “Best Director” thingy. Ha.

Here’s a word from others who; hmm… think a certain flick may indeed be IMPORTANT!